While The Coalition of Spirit-filled Churches is all about credentialing and supporting our chaplains and pastoral counselors as well as promoting quality "ministry in specialized settings," it is NOT about making political statements or taking political positions. Yet SOME issues and events in life demand justice and cry out for advocacy and fairness and even defense of the vulnerable.

This page is dedicated to just that. Hence, in honor of and in memory of Martin Niemöller: 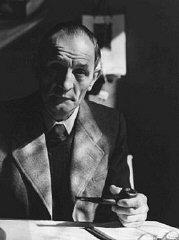 Martin Niemöller, a German theologian and pastor, on a visit to the United States after the war. A leader of the anti-Nazi Confessing Church, he spent the last seven years of Nazi rule in concentration camps. United States, October 4, 1946.

Martin Niemöller (1892-1984) was a prominent Protestant pastor who emerged as an outspoken public foe of Adolf Hitler and spent the last seven years of Nazi rule in concentration camps. Niemöller is perhaps best remembered for the quotation:

First they came for the Socialists, and I did not speak out —
Because I was not a Socialist.

Then they came for the Jews, and I did not speak out —
Because I was not a Jew.

Then they came for me —
and there was no one left to speak for me.

The quotation stems from Niemöller's lectures during the early postwar period.

For a full biography of Martin Niemöller, please click HERE.

Concerns about the lack of human subject research protection in the government today:
Did Obama's EPA relaunch Tuskegee experiments?
from the Washington Times

Meeting in Boston, at the American Academy of Religion and the Society of Biblical Literature, a diverse group of Christian Theologians launched the BOSTON DECLARATION at the Old South Church at 12:30 pm on Monday November 20, 2017. In 1934 Karl Barth, Martin Niemöller and pastors of the Confessing Church released a Barmen Declaration, calling out the German Church’s complicity with Adolf Hitler’s Nazi Regime. Inspired by Barmen Declaration, the Boston Declaration contends that following Jesus today means fighting poverty, economic exploitation, racism, sexism, and all forms of oppression from the deepest wells of our faith.